MultiChoice Group and its partners use cookies to help deliver services and for advertising purposes (see details in Privacy Policy ) By using this site you agree to this. You can change your cookie settings in your browser.
Media: 16 April 2020

Africa’s leading video entertainment company, MultiChoice Group, teams up with two of South Africa’s biggest and most loved soccer clubs, Orlando Pirates and Kaizer Chiefs, in an effort to counter the spread of COVID-19 in the country. 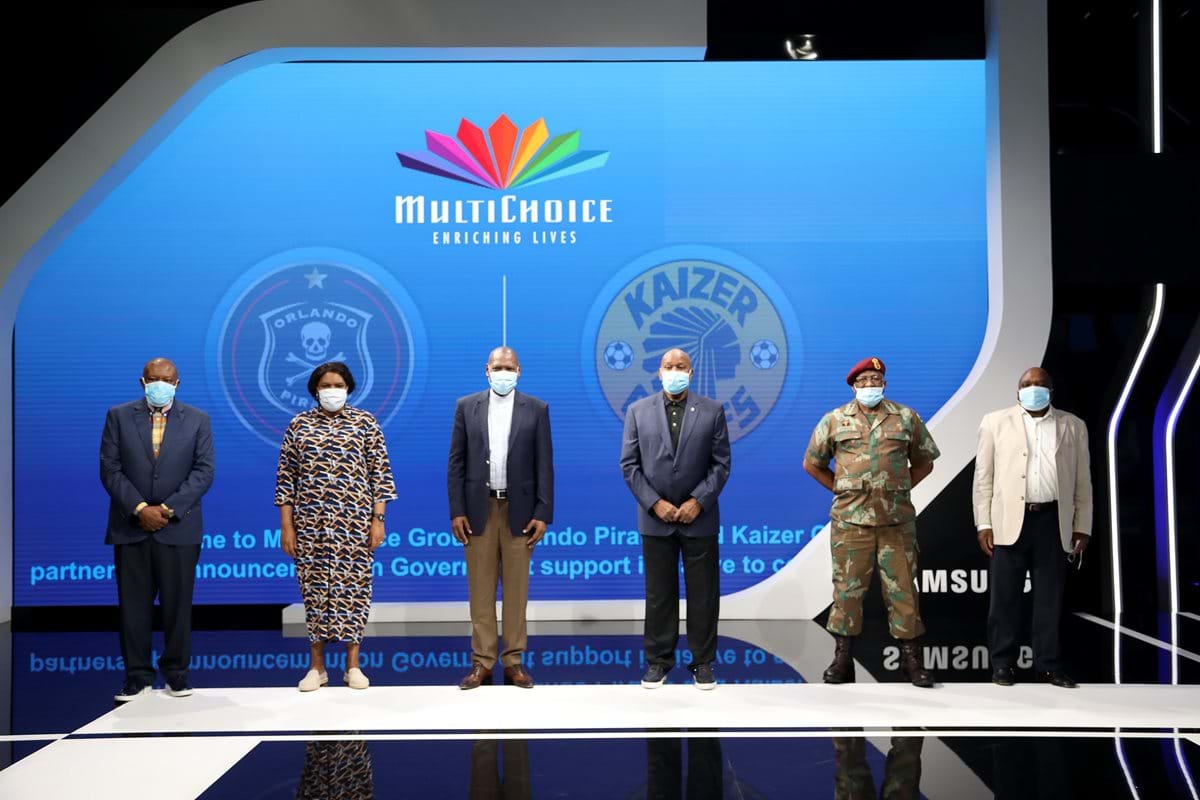 Alongside MultiChoice, the two leading football clubs have come together to support healthcare workers and law enforcement agencies in their daily fight against the COVID-19 pandemic by donating personal protective equipment (PPE) items.

As active participants in the fight against this global pandemic and mitigating its impact on the lives of South Africans, MultiChoice, Orlando Pirates and Kaizer Chiefs are forging a partnership with the Ministry of Health and the Ministry of Sport, Arts and Culture to distribute protective gear.

“Given the direction and guidance of the Minister, we would like to acknowledge our nurses and doctors, our men in blue and our army personnel who have been on the frontline, placing themselves at risk in the fight against the virus and saving lives whilst the rest of us are required to stay at home per government’s call to do so,” says MultiChoice Group Chairman, Imtiaz Patel.

MultiChoice also recently announced a fund of R80 million to buffer creatives in the film industry from income loss during this unprecedented period. This latest response by MultiChoice is in reaction to the announcement made by the South African President on 9 April 2020, requesting that citizens stay at home for an additional two weeks as nationwide testing is rolled out. “We hope that this contribution will aid our brothers and sisters risking their lives in hospitals and clinics and on the streets rolling out mass screenings and tests, and those that are enforcing regulations, in carrying out their biggest sacrifice yet,” states Patel.

This partnership is a goal for the nation as the football fraternity takes collective action to protect essential services workers. says Dr Irvin Khoza, Chairman of Orlando Pirates Football Club.

“We recognise that the nationwide Orlando Pirates and Kaizer Chiefs supporters live in the same townships and suburbs and villages, even the same homes. Our supporters live, work and socialise together. It is the wisdom of this recognition that has strengthened our hands into collaborations into matters of national importance.

“Collaborations help us amplify efforts. The efforts of Orlando Pirates and Kaizer Chiefs have significantly been enhanced by our partner MultiChoice – a true corporate citizen that understands that its needs are not at odds with that of the nation. Chairman Imtiaz Patel, I want to thank you,” Dr Khoza adds.

Kaizer Motaung, the Chairman of Kaizer Chiefs Football Club states: “The sacrifices by those tasked with looking after those that have been infected will not yield the desired impact if we all don’t adhere to the regulations outlined by our government and stay at home.

“On that note, I am pleased to announce that our players - from both Kaizer Chiefs and Orlando Pirates – will embark on a nationwide social media public campaign in a bid to raise awareness and encourage everyone to stay at home and observe strict guidelines of personal hygiene to minimise the risk of getting infected. To ensure that our frontline workers are best served and protected, it calls on every one of us as citizens to ensure we play our part and observe government regulations to stay home.”

During the broadcast, Health Minister Dr Zweli Mkhize gave an update on the latest confirmed cases. The number of confirmed COVID-19 cases have risen to 2506, with 90515 tests conducted. He reported seven new COVID-19 deaths.

“And I would like to say to all South Africans, we do need to give a lot of support and appreciation to our health workers to the work that they do. The contribution that has been made through the partnership of MultiChoice, Orlando Pirates and Kaizer Chiefs is a huge boost in recognising the role and determination and commitment of our health workers in the fight against COVID-19.”